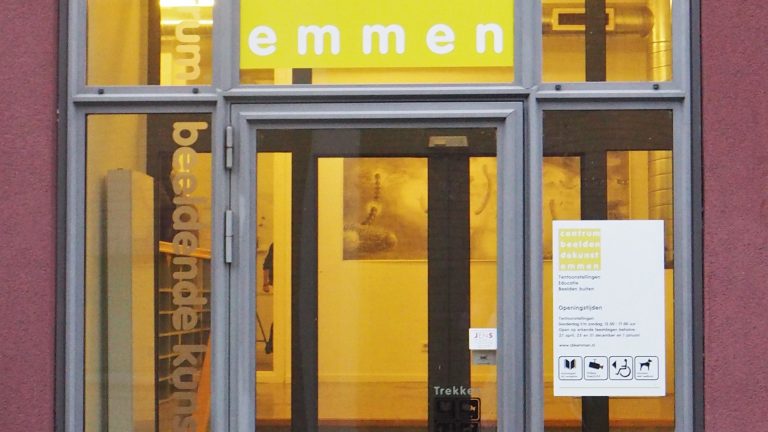 In Emmen there’s something going on. It’s about the future.

A few months ago, Stichting Kunst en Cultuur Drenthe and CBK Emmen, two regional Dutch institutions involved with supporting and promoting the arts, joined forces in a project called Toekomstdenken, a neologism meaning ‘future thinking’. It consisted of an open call for artists in the province of Drenthe to participate in workshops, be inspired by the theme and create new work. And to submit that work to the eponymous exhibition ordained as spawning ground.

This spawning is backed threefold for the artists. Firstly by the opportunity to exhibit their work and by the promotion involved. Secondly, by the complementary activities in inspirational workshops, and the so-called ‘Verdiepingsdag’: a day of lectures, workshops and discussions of the artworks. Thirdly, by an element that also involves some competition: on the basis of the submitted works a jury will select promising artistry and the selected artists will be offered a master class trajectory culminating in a second exhibit. Some well known artists of the region have the honour to act as figureheads of the project, as master artists and as jurors.

Worth a special mention, as peculiar as this can sound, is that there are no age barriers set in this project. I cannot remember having seen ever before any project in the arts with edifying efforts involved, that wanted participants of all ages to be included. There’s always the limiting to ‘young talent’ (although I once saw a call for artists max 40 years.) So, compliments are due to the initiators for the lifelong learning angle.

As the vernissage of Toekomstdenken took place last Saturday, we now can say something about what the project has yielded thus far, for artists and public. Yes! We not only have to consider the art, but also the public.

Because when you want to have interesting art and invest in challenging and edifying artists, you also need to interest and challenge an audience, and invest in them. It’s like the famous tv talent contest issue: how many talented new starlets will be able to sustain themselves in the light of the limited capacity of public attention? You have to grow the public. In size and receptibility. Here is the game: on the dealing hand, art is mediated by structures of arting, and on the receiving hand it’s the formidable ‘art is in the eye of the beholder’. So, when we aspire to arting, how do we inspire and instigate the spectators to eye the arted?

We can, of course, consider the exhibition itself as the inspirational workshop for the audience: look and see! The theme and an awareness of the project goals provides input for processing the work. And as the figureheads also made new works for Toekomstdenken, they set up a kind of guidance, a golden standard, a departing point for the public. Furthermore, the public faces a fine calling, in that it is invited to vote too: The most voted artwork gets its creator a wildcard for the master class trajectory.

It is a pity, then, that the voters-to-be are not more comprehensively invited to take up more of the challenge. In her opening speech at the vernissage, ‘figurehead’-artist Maria Berkhout quoted the famous South-African poet Antjie Krog, to convey what creating means for the artist: to be here and now, and listen in silence to what makes itself heard, and take it up, ‘in zelfgevecht’. Self-struggle or self-duel, a pivot in the process of creating art.

But how then, participating as  part of the public, do you do this? At the entrance you are given a voting form. There’s no extra information provided to the visitors about the goals or ideas of the project or the exhibit. The form only poses one simple question: which artwork do you think is most beautiful?

Does this ballot give the spectator an impetus to rise to the challenge?

When I wandered through the exhibition with this form in hand, I found answering the question a confusing task. There were several works I found most interesting and that strongly appealed to me. This big, tan-coloured drawing right at the entrance, for instance, where mysterious warty capsules connected in pairs, seem to watch, or guard, how free floating small tubes, each crowned with a band of Hebrew markings, are irresistibly attracted to a hovering cloud of big lightbulbs contained in a big tube also decorated with Hebrew markings, listening closely, urgently wanting to merge. What will arise out of this appeal? The will of God’s word?

Or the delicate, opaque transparency of a pleated pinky piece of – maybe wax. It conveyed to me a felt sense of the fragility of our skin, of our bodily integrity, of our wholeness as human beings. What is to become of us in this complex and harsh world we inhabit?

Or what about this board on the floor, on which a small batterypack fuels a white plastic strip of about twenty centimeters to move back and fro with its limp tip in a shallow grey square tray. In the circa fifteen centimeters range that the strip moves, it shoves water droplets ever deforming, pulling themselves together with all the viscosity they have, to resist, and to rest and being shoved about and formed and deformed again. Also they seem to convey something very crucial about what it means to exist: the endless perdurance of perturbation, on the tick of time, and the fascination of witnessing this in it’s ever repeating pattern of never the same.

Or the line of white human faces, mounted high on the wall, watching unperturbed ahead of them while slender little animals with sleek heads and long stretched jaws, some with small wings or a fishtail, partly fused with them, seem to ascend or descend them. It is unclear what this does to the different parties. The white faces look immaculate and artificially intelligent. Have they left their biological mud and messiness behind? Do the animals therefore try to leave them or to swamp them? Will it bring the humans awareness of their interrelatedness with these animals? The whole brings about something with an obscure trophy-like or icon-like quality, as we look up to the faces, installing an ambiguous reciprocal relation: like the moose head on the wall these human-animal fusions seem to attest to our potency and our pure masterly manhood, but, actually, we have to look up at them and acknowledge their ability to bestow our humanity upon us. We depend upon them, and silly puffed up selves as we are, we do not recognize it. But they steadfast protect us and they guard, good-natured, our thin assuming coat of being more than them. Can we do without paying tribute to our animal ancestry?

As I move along the exhibition and make last small round to conclude, I weigh the interest and appeal of these works to me. And try to give my vote: which one is the most beautiful? Concentrating on the question and desperate to make up my mind, I stare at the small piece in front of me: a pendant on a golden thread, consisting of a plain acorn, stripped of its cap,  held by a simple ring of the same unbroken golden twine by a macramé technique. It is not a work that will catch a lot of attention, small as it is, and casually mounted on one of the pillars sustaining the mezzanine. A small label states the title: 1=1000.

I ponder and zoom in. One means thousand. Seeding the seed means seeding a thousand seeds. In all its light beige unassuming inconspicuousness it is bulking with self-awareness. In form and content. ‘I’m a costly piece of art’. ‘My worth is a thousand more than you’. ‘I’m exceptional and in the future I may be even more exceptional and highly prized. Cherish me’. It is as if the whole of the exhibition is sucked in by this nut and starts to revolve and swirl around this elegant and bold core, this solution to the challenge of Future-Thinking.

The gallery is about to close. With a sigh of relief I take down the name on my voting form, heading for the exit after my prolonged visit. But I find my ‘zelfgevecht’ muted only momentarily.  Yes, I listened and beheld in silence to how the works spoke to me, made themselves heard and let them appear in my eye. But what criteria did I use to answer the beauty contest? I found ‘the most beautiful’ an impossible category for weighing these works against each other. Quite a few works pulled a strong hold on me, but ‘beautiful’ is not a word I could use to sum up my sensations. I wonder what criteria I did use to decide my vote. Would I have favoured the pendant in another context? Without the explicit context of this exhibition, or the theme? Or without reading the title? Or without the ballot form? Or without the impossible chasm the term ‘beautiful’ digs?

The artists have done well, I think, in Toekomstdenken, with interesting new works and outlooks on the idea of future. Lots of talent and potential there. But if we want to sustainably grow the potential of artists for the future, I think it best to plot more pendant grassroots devices for ploughing and preparing the receiving grounds too.

Art can be a bitch. You never know what’s going to happen. Art is a good friend, and will be there for you. Art takes you on road trips, adventures. Art shows you new ways of looking.

The more, the merrier/but take it slow.

It may take a while sometimes to get acquainted with new ways, strange folks, and make new friends.

I see art as travelling to another time, another place. ‘They do things differently there’. I have to ask myself what’s going on, to make sense of what I observe. And notice more.