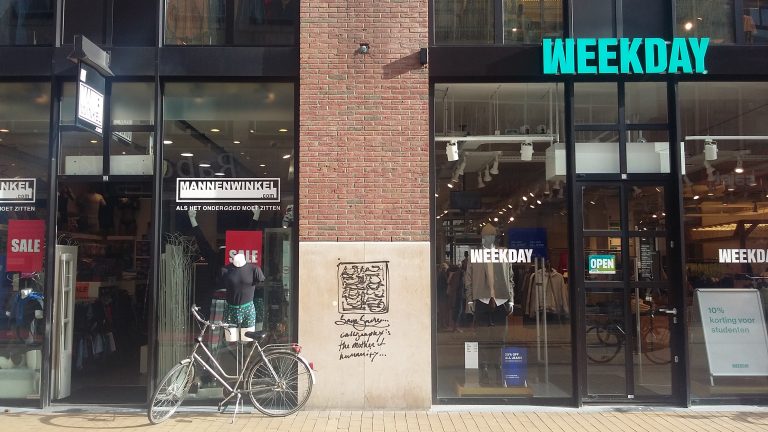 I’m on my bike, running late for an appointment, and alertly steering through the bustle of the high street, as I look up and see it.

It’s spray-painted on the light beige natural stone panelling that separates the windows of two different shops. As I drive by, I read: ‘calligraphy is the mother of humanity’.

The slogan doesn’t show in the screaming out loud caps lock style that usually characterizes graffiti, but is fittingly drawn in handwriting. Right above it is drawn a big black square circa 50 cm in width; its lines filled with squibbles. It looks like a QR-code, I realise as I glance over my shoulder to have another look.

The text is catchy and enigmatic. It is, I ponder, also somewhat unlikely as graffiti. Not only because your usual spray-painting in such or alike shop street surroundings is the tag, that hastily squirted territorial flag putting forward the author’s existence and claiming the turf. But also because there’s such an resounding quality in the figure of speech it uses, really sticking to the ears. It reminds me of the old proverb ‘necessity is the mother of invention’.

As I cycle on, I notice some more black spray-painting on the wall panels dividing some shops further down the street. It looks like barbed wire. When I come close, I see it is the same handwriting again. Its resemblance to barbed wire is caused by a repeated pattern of what could be two words.

I cannot make out what it says. I’m intrigued. The unreadability of the barbed wire connects with the slipshod random hit and run quality to be expected for grafitti in a busy street like this one, a street that you’d be surprised to see empty at any time of day or night. At the same time there’s a definitive quality of care and attention about it, in how neat it unhesitatingly rims the top of the panelling. And then there’s the puzzling piece with the apodictic slogan and the mysterious QR-code.

I promise myself to take the same road on my return, to have another look at it. But as always as I ride my bike, my thoughts just float and evolve freely around at whatever catches my attention. And thus pondering the three words of the dictum, I realise how there is an auratic force at work when something is called into life. ‘Calligraphy is the mother of humanity’. And the aura’s is doubled here, as a mother is born, as well as humanity.

As I’m the sort of person that is interested in all sorts of questions relating to a subject I’m interested in, I’ve done some reading about art. And the claim of the catchphrase calls into mind what I’ve read about the origins of the arts in the history of mankind. There is the idea that decoration stands at the root of the visual arts, as paleolithic humans started to enhance the appearances of tools that were important to them and that took so much effort and skill to create, by markings that had the sole use of distinguishing them. There is also the much bigger idea that not in decoration,  but in the highy skilled picturing of animals in the caves by paleolithic man, we see reflected the origins of art, as it is basic to the human mind. The cave paintings show its capacity and need to imagine, to use its abilities to observe and distinguish in this very special way, to express, to assess, to reflect. The cave paintings thus show that mankind had been born with all its cognitive capacity, long before the emergence of written language.

So what exactly brings this instance of graffiti art up against this state of the art viewpoint? I ask myself as I later that day again take that same road.

That not the visual arts with their being grounded in mimesis should get the credits of making humans human, by bringing knowledge and ideas out in intersubjective space, to make objects of it that we can look at and reflect upon. But that instead the primacy goes to calligraphy: the expression of ideas in the beautified abstraction of written language. As I recall the barbed wire-image, I see the decorative quality of the convoluted garland of hooks and loops bringing on an association with islamic art. In Islam, mimetic imagery is forsaken, as it has the capacity to spoil the human mind, that should better itself in focussing on gaining real knowledge. Abstraction forces us to focus on essences of ideas and contemplate them, while the mimetic and the picturesque can lead us astray by invite us in immersive dreamlands and allowing us to lustily linger on.

So can the graffiti be an ad for Islamistic politics? I don’t think so. I would expect to see a more straightforward reference to religion and Islam. But as graffiti it holds in itself this aspect of a critique of the commercial consumeroriented environment it is in,  and it contains a call for dedication to reflecting. It doesn’t rule out imagination, as stories and all kinds of poetry can get their embodiment in beautiful handwriting. What’s more, there is ample evidence that the act of handwriting spurs the imagination and creates deeper reflection on what is noted down, in contrast with the case of typewriting. Writing by pushing down keys on a keyboard doesn’t involve the same level of intense left and right hemisphere usage of brain. Mindlessness is rather in the copying act of typewriting, than in the act of creating characters.

The graffiti piece also makes me think of Hegel, the 19th century German philosopher. He is famous for being one of the last of the great speculative philosophers  and being put upside down by Marx. In his all-encompassing thought system the arts function as crucial faculty and form in the enfolding history of mankind. To Hegel history is about the progress and development of the human mind. He holds that the Greek and Roman mastery of realistic sculpturing summed up the pinnacle of what art can do in approaching truths within the sensorial realm. The art forms of painting and poetry, for example, that peak in the 19th century, digress from the sensorial and come to depend increasingly on the forming of truth in the mind, as ideas. The course of history cannot be otherwise than this: as art comes to be evermore conscious of itself, by bringing its potencies and inabilities into play (as is the project on which art increasingly rests), it will ultimately blend into playing the mind rather than the senses, and thus will dissolve into philosophy. Hegels line of thinking about art was  famously revived by the art philosopher Danto in the second half of the twentieth century, with his essay ‘The end of art’. That we now live in the age of the end of art doesn’t mean there’s not going to be art anymore, but that the developmental course of selfconsciousness and reflection on what it can be or do has naturally reached its full potential and thus come to an end stage. Art can now be anything, but can’t add significantly to its own consciousness so as to overturn earlier expressions in this respect.

The graffiti piece with its pointing at itself forefronting the act of writing, and pointing beyond itself by way of the calligraphed QR-code can possibly be read as a commentary to this historical reasoning. But what could the QR-code pertain to in this respect? A new kind of writing in summarizing the potentiality of it and aestheticizing this in this compacted and framed form?

For me the idea of the QR-code suggest something as there being another level where you’re invited to go to, and if you follow along you may enter another world that lies beyond, you can learn more or get more content. But as I dismount my bike to take a closer look, I notice that what I remembered as a QR-code, could also just be taken as an image added to text. The square frame of the spray-painted lines is filled with these black squiggles that arguably can convey this idea, but the three characteristic small squares that frame any QR-code are missing.

Underlining the square, I see two words I didn’t notice before, and have a hard time to read. ‘Saire Sairey…’? ‘Jaise  Jaivy…’? ‘Sava Sacre’?

I check out the barbed wire on the panelling further on and see that it is composed of the same words or names, but gives no additional clearity on how to read or decipher them. As the calligraphy has lost its readability, does it then turn just to decoration or does it keep its conceptual, abstract expression of the ‘been there’ of the artist? This way or that, the squiggle-image, underwritten by what may be the name of the artist, amounts at the least to the sketch of the image that writing can produce, and makes it to the form of concrete poetry.

Concrete poetry and graffiti have something in common: they pull the very surface of their manifestation in its triviality in the here and now, into the significance of deeper meanings and being art. In this particular instance of graffiti, there is also the extra meaning in the domain of ideas at play, because of the universalising claim in the text about handwriting.

This piece of graffiti has certainly succeeded in drawing my attention to deeper possible meaning and broader significance, as it states that our modality of being human sprouts from paying attention to handwriting. And of course there’s also the moral connotation of the word ‘humanity’.

I really like the fact that all this is mediated by graffiti, the art form that quintessentially embodies the revindication of the rights of the unique individual and singular soul, on being there, to be present, to exist, conscious and with art, in public space.

Neither Hegel nor Danto meant the end-state of art they envisaged as having emerged in their own times as determining artworks to have no real consequence anymore. But they did think the language of art had exhausted or more or less overruled itself and therefore the impact of art as such would diminish. It’s clear that they only considered western art and universalised the trends they saw unfolding in that. As long as we live in our neoliberal capitalist system, and are always under attack of the anonimous and systemic forces that separate our critical embodiment from critical higher cognitive thinking abilities, that predate upon our vulnerability to ease and comfort to get us to consume and be addicted to this system, I think art retains its full potential to invent and reinvent itself to be fully historical.

Art can be a bitch. You never know what’s going to happen. Art is a good friend, and will be there for you. Art takes you on road trips, adventures. Art shows you new ways of looking.

The more, the merrier/but take it slow.

It may take a while sometimes to get acquainted with new ways, strange folks, and make new friends.

I see art as travelling to another time, another place. ‘They do things differently there’. I have to ask myself what’s going on, to make sense of what I observe. And notice more.